Quick note: ADVrider will be rolling the new bike in Italy in mid-June, so look for an in-depth review soon.

Representing ADVrider.com, I recently took some of Energica’s street models to New York after the brand was acquired by an investment firm focused on electric vehicles. Ideonomy (IDEX). Thumbnail Review: energetic manufactures three models of high-quality, high-performance electric motorcycles that are as good if not better (especially in terms of performance) than anything out there. The only problem: with very limited production capacities, they only produced just over a thousand motorcycles in 10 years of operation, but according to our conversations with Energica CEO Livia Cevolini and the Ideanomics executives, everything is about to change – and in more ways than expected.

Energica has just unveiled a Fourth model, a white sheet “green tourism” machine called the Experia which seems to have leaned a bit towards multi-surface capabilities. Initial images seen here show the Experia as an ADV-style road bike with hard panniers and a few ADV-style cues, particularly around the fairing and stance. Indeed, the Experia is shown (from above) meandering down a dirt road, which doesn’t automatically qualify it for ADV status, but hey, at least they’ve got it dusty.

Otherwise, the Experia’s spec speaks more to adventure riding than pure high-speed tarmac blasting. While Energica’s high-end Ego and Eva Ribelle bikes deliver truly flattering performance, including 171 peak horsepower and 159 pound-feet of torque from their liquid-cooled single-gear motors, the Experia will use a new motor making “only” 105 ponies at 7,500 rpm and 85 lb-ft of torque. These specs compete well with other mid- to large-size ADV bikes like the Honda Africa Twin and Yamaha Ténéré 700, and more importantly, the smaller motor shaves 22 pounds off the drivetrain used by the larger Energica machines. Energica claims a 0-60 time of 3.5 seconds and a top speed of 112 mph.

Even more important (or at least equally important) are the improved power reserves for the Experia. The bike will come with a newly designed lithium-polymer battery with a capacity of 19.6 kWh at 80% charge and 22.5 kWh fully charged. Pro tip: Battery manufacturers advise against keeping EV batteries fully charged due to degradation issues, unless the rider is going on a long ride where the maximum range is needed. Pairing that big battery with a smaller motor provides better range, with Energica claiming 130 miles of straight highway range and 160 miles of mixed driving, but 256 miles of city range due to lower speeds and a more regenerative braking. It is not yet known if the “urban” driving range can be related to navigating a steep and slow BDR route.

While those numbers don’t quite double the lineup of Zero’s or Harley Livewire’s best bikes, they are huge improvements. It’s important to recognize how this range is a potential leap forward for electric motorcycles, especially in Europe. In the EU, destinations are generally closer than in the US and Canada. The EU also has more chargers in more places compared to the larger North American landscape, making 130 miles of freeway range an important consideration for European riders who may be looking to add a bike. electric to their routine. Energica’s prices are higher than Zero and LiveWire, but not by much, and the Experia’s capabilities can be a big plus. Energica bikes also include another advantage over its main rivals: fast charging capability. 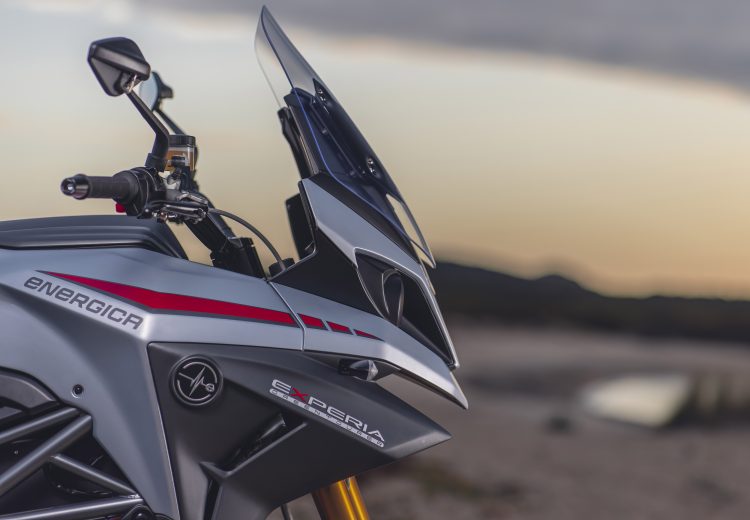 The steep windshield may be adjustable and should provide decent weather protection. Photo: Energica

All Energica models have built-in Level III “DCFC” fast charging capability, and Energica claims the Experia can go from zero to 80% charge in 40 minutes on a hot charger. That’s enough time for a layover with some food and maybe a few minutes of sleep or a phone call, and it’s certainly better than the 2.5 hour wait I’ve endured with a rural charger from level II on a road trip with the Zero SR/S a long time ago. Energica bikes will also accept Level II and Level 1 (wall outlet) charging.

Beyond those important aspects, the Experia is packed with tech goodness and a bit of space to make it a bit more dirt-worthy. At 573lbs/260kg, that’s not light, but a GS/SuperTen/KLR/SuperAdventure/PanAmerica isn’t exactly a flyweight either. The Experia features 17-inch cast wheels front and rear, with fully (manually) adjustable Sachs ZF struts front and rear with nearly 6 inches of travel. Pirelli Scorpion Trail II tires are standard, but upgrading to something a bit more grippy could allow the Experia to move on to more interesting off-road destinations. Dual 330mm front Brembo brakes with ABS team with a 240mm rear Brembo setup and Bosch IMU, which adds cornering ABS to the control package. It’s not yet known how much control riders will have over ABS action and activation, but there will be four standard riding modes and three user-programmable modes, including traction control controls. Riders can also modify engine regeneration/braking on four levels. 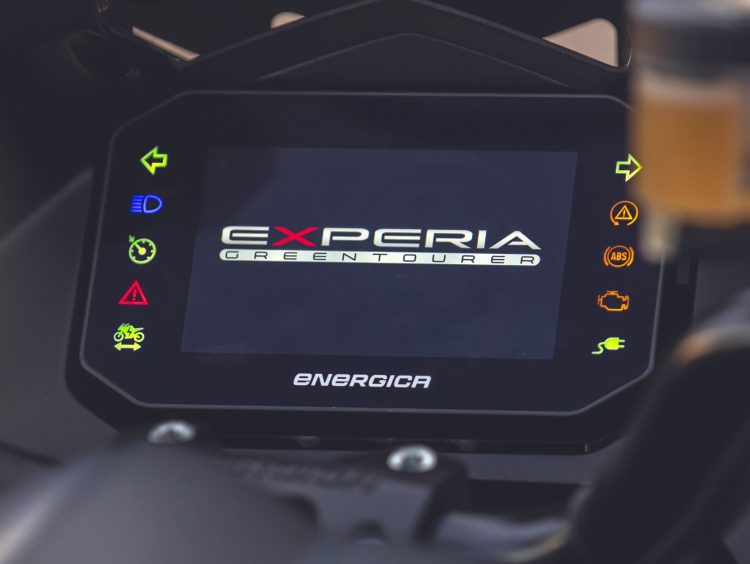 The 5-inch screen doesn’t appear to be a touchscreen. Photo: Energica

Up top, riders will perch on a 33.3-inch-tall seat and fine-tune the bike via a 5-inch TFT LCD display and, most likely, an app, too. The windshield seems adjustable but we don’t have confirmation on this yet. ADV-style hard saddlebags and a top case feature prominently in Experia’s photos and video, and early buyers can include them in a special introductory package. So far, pricing hasn’t been revealed, but the pre-order link on Energica’s site is active. Currently, North American dealers are not included in the dealer locator menu. Energica told ADVrider.com that pre-orders will officially begin on June 1, so perhaps the site will be updated. Again, no prices have been posted so far.

Overall, the Energica Experia seems like a more 80/20 bike as designed, with highway strafing as its primary focus. However, a few key changes could give it more off-road prowess. Since I’m the lucky duck heading to the Dolomites to test it, I’ll see if we can at least try it on unpaved roads. 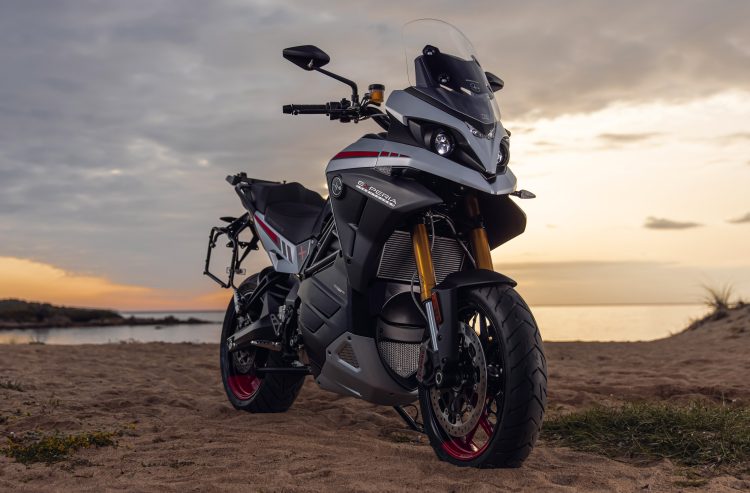 Without saddlebags, the Experia looks more like an adventurous sport tourer. Photo: Energica

It’s a good looking bike too, and from most angles it’s a bit hard to tell it’s an electric. And now, with financial backing from Ideanomics, who I’ve been told they’re committed to growing the brand and fueling production, more bikes at lower prices (eventually) could signal a bright future for the brand. Energica, which actually got its start in electric motorcycle racing. years ago. Time, of course, will tell.

Check back soon for a review of the ride. What do you think of the new Experia? 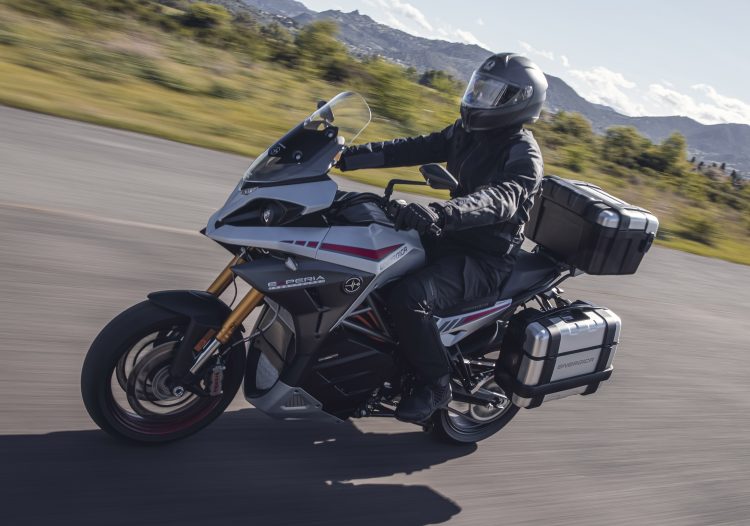 Sound Transit board must act now on passenger experience